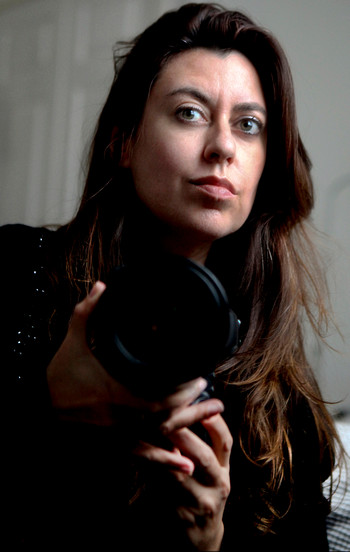 I love Theatre, Dance, Photography and People…. So I feel very fortunate to be able to combine my passions with my work.

I graduated with distinction from Central St Martins School of Art and Design in Art Photography in 2002 and since then I have worked with leading British theatre and dance companies including The Royal Shakespeare Company, National Theatre, Shakespeare’s Globe, Young Vic, Royal Opera House, Almeida Theatre, Birmingham Repertory Theatre, Rambert Dance Company amongst others.

As a former ballerina I grew up in theatres and on stage, moving from being on stage to photographing shows was a very natural transition in my life. Theatres and stages have always been a familiar place where I feel comfortable. I have a strong connection and understanding of movement, which clients say is visible in my stage photography. My performing arts and portrait images are dynamic and according to my clients they display my genuine passion for the arts.

My photographs have appeared in Vogue, the New York Times Magazine, the Guardian, the Independent and Time Out (London) and many other publications. I have participated in more than 40 exhibitions, including Shooting Shakespeare produced by the V&A and Globe to Globe at the Shakespeare’s Globe.

In 2006 I was made the Royal Shakespeare Company’s Artist-in-Residence and I have documented their work for more than a decade.

In 2011, Royal Mail issued 10 stamps commemorating the RSC 50th anniversary. My work featured on 4 of the 10 stamps.

2014 saw the opening of my first solo exhibition Shakespeare in Brazil. Launched at the Centro Cultural Banco do Brazil (CCBB), Shakespeare toured Brazil for 5 weeks, visiting Rio de Janeiro, Sao Paulo, Belo Horizonte and Brasilia. More than 18,000 visitors went to the exhibition. My book Shakespeare by Ellie Kurttz was published the same year.

In 2015, I became an Ambassador of Spectaculu, a unique arts education school in Rio de Janeiro, Brazil. I am delighted to be associated with a social enterprise that supports young marginalised people to reach their artistic potential.

In 2016 my exhibition Shakespeare, opened at the Brazilian British Centre in Sao Paulo as the official opening of Shakespeare Lives celebrations.

In 2018, after a wonderful 4 years working with 1418NOW following the Tower of London Poppies around Great Britain, creating a visual diary of the Poppies tour. My exhibition Poppies Reflections opened at the Imperial War Museum in October that year.

For estimates or a friendly chat about commissions and collaborations, please email me on [email protected]
Hope to speak soon.

Testimonials:
‘Ellie’s intuitive ability to understand the spirit and intention of a theatrical piece, a wildlife photographer’s patience and a sports photographer’s sense of opportunity for capturing the moment that counts and for her disarming warmth and irreducible humanity, all of which have made her my favourite theatre photographer ever since we started collaborating in 2004’.
– Sir Michael Boyd

‘Her human subjects are at ease and her lens can read their thoughts. She is remarkable¦ There is a clarity in the way she can create an image which, even though she may be seeing the person or scene for the first time, peels away layers to reveal something ineffable’.
– Lady Susie Sainsbury

‘Ellie brings such a precious sense of seeing because the click of her camera is like the wink of the lover’s eye. And as Shakespeare remind us in one of his most well-known sonnets, When most I wink, then do mine eyes best see’.
– Professor Paul Heritage